Daniel Kahneman’s Thinking, Fast and Slow, while not directly concerned with productivity, got me thinking about my own routine. Until recently I was a Things devotee, feeding items into my Inbox and diligently tagging, grouping, and scheduling every task with painstaking detail and devotion. Using a single pipeline, I assumed, would form more consistent habits and reduce the cognitive overhead of juggling multiple tools.

But that’s just not how the human brain works. I became skilled at feeding information into the system I’d devised, but struggled to identify what I should actually be doing at any given moment. Thinking Fast and Slow is based on the idea that the brain has two discrete modes—one which is fast, emotional, and instinctive, and another which is slow, deliberate, and effortful. Based on Kahneman’s theory, I split my single pipeline in two, splitting my workload into small and big chunks.

The small chunks go into Clear, a brilliantly simple Mac, iPhone, and soon-to-be iPad app. Clear has no tags, projects, or inbox. Just lists, and items that can be checked off as they are completed. Tasks I want to do today go into Do, tasks I can hand off to someone else go in Delegate, and tasks I want to save for the future go into File. Its simple interface and gesture-based controls are perfectly suited to the fast brain. The app stays out of your way. Clear is my inbox—tasks go straight from my brain into one of my three lists. 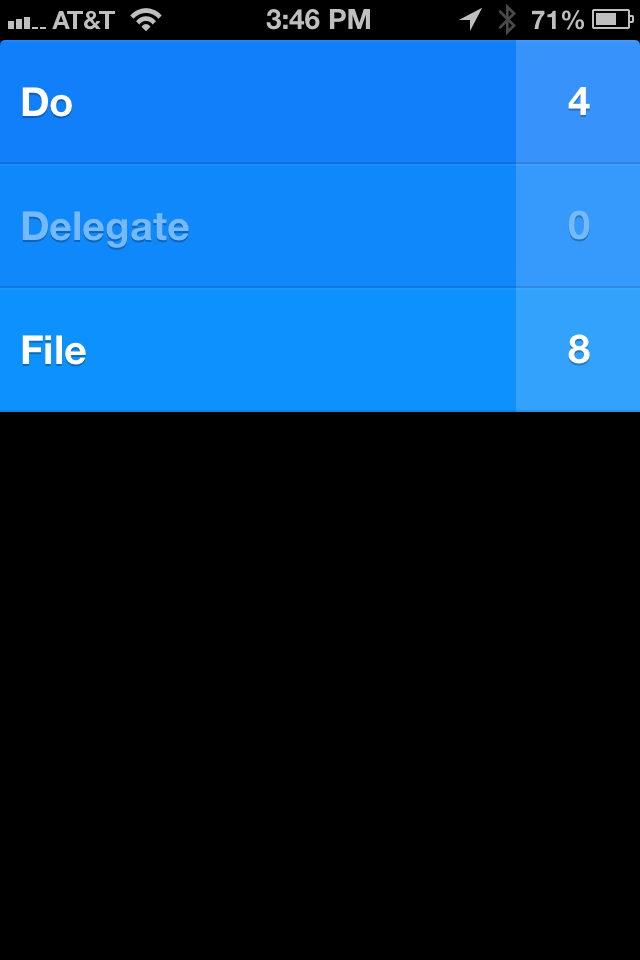 One of my biggest struggles with Things was collaborative projects. I’d used Asana with a number of teams and struggled to meld it with my own system. With Clear now acting as my inbox, I moved entirely to Asana for large projects and haven’t looked back. Asana—aside from its abysmal mobile app—is brilliantly usable. It makes it simple to divide and conquer big projects, especially across large remote teams. Asana is perfectly suited to the slow brain. It shines in cases where five extra minutes of big-picture outlining now will save hours of confusion later.

This isn’t a pitch for Clear or Asana. Use the tools that feel right to you. If you pick up a new app or service and it doesn’t feel comfortable within a day, drop it and move on to the next one. Find tools that fit with the way you work, not ones that force you to change it.

Another tool that we use at Valet.io, called iDoneThis, emails each team member at 6 pm to ask, “What did you get done today?” and shares the responses in a digest the next morning. It doesn’t solve a technically complex problem, but routinely engaging in the very natural act of sharing what we’ve accomplished has had tremendous value. It helps us see how our small accomplishments fit together as we build a much bigger vision.

Don’t let being productive stop you from being creative. Think big and small—don’t choose a one size fits all solution. Get your plan of action on paper as quickly as possible. Be unstructured, and get back to building.